There IS such a thing as too happy in the crib! 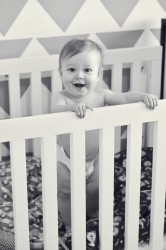 There IS such a thing as too happy in the crib!

Most parents are ecstatic to learn that their infant enjoys being in their crib. The sounds of cooing and playing at bedtime or when they wake, are a sign of good things!

Well…believe it or not, this can also be a not-so-good thing, for a couple of reasons. (In addition to the dangers of positional plagiocephaly.)

Firstly, we want them to learn that the crib is for sleeping, so that they know when they are laid in bed, it’s time to wind down and prepare for sleep.

Secondly, it’s important to create a happy association with their crib, rather than one of crying (which can happen if they play in the morning or after nap until they begin to fuss or cry).

A few minutes of playing before sleep or after they wake is just great, but be sure to limit it so that:

A) Prior to bed, it’s for no more than 30 minutes . Longer than 30 minutes of playing in the crib before sleep might mean that their schedule needs some readjusting and can teach them that it is a “play zone”.

B) After they wake, they are tended to before they get upset – within 15 to 20 minutes. Leaving it too long and waiting until they fuss, after waking, might mean that they are learning that if they fuss in bed you will come right away. This can lead to more night wakings and a tougher time going to sleep, as well as creating an unhappy association with their crib, when we REALLY want to establish a happy association with their cribs, bedtime, and sleep in general. Try to go and get them while they are happy and make a really big deal of them sleeping well and waking rested. Likewise, if they are crying when you go in, try to soothe them and get a smile or two before picking them up!